Chat with us, powered by LiveChat

The insurance industry provides roughly 2.7 million jobs nationwide, according to this industry article from Property & Casualty 360, and is the leading employer in a whopping 9 states of the country.

Insurance investigators are usually featured characters to create interesting heist and action films. (Think “To Catch a Thief” and “The Thomas Crown Affair.”) But what about insurance agents, salesmen, and insurance company employees? These characters are often used as a kind of screenwriting shorthand that denotes “everyman” or “good guy” status. They are often considered stable, honest, and in most cases the moral center. We whole-heartedly agree with that characterization. Occasionally, the job is used as a misdirect for the unlikeliness of their situation.

Below are 10 examples of films (and a limited series, because it’s just so good) where insurance jobs play important roles in the plot or steal the show. So if you want a list beyond the oft-mentioned “Cedar Rapids” or “Double Indemnity,” this is for you. Maybe it’s time for an insurance-themed movie night each week! 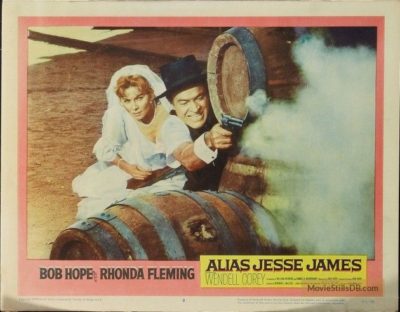 Bob Hope plays an insurance agent in the old West who is struggling until he finally sells a huge life insurance policy,…to the outlaw Jesse James. He spends the rest of the movie trying to get the policy back from James while keeping him alive until he can do so. It’s ridiculous, to be sure, but this movie is so full of other Western stars from the time, it becomes great slapstick fun. (YouTube, iTunes)

In this Billy Wilder classic film, Jack Lemmon plays an Insurance Agent at a large company that is exploited by his bosses into turning over his conveniently-located apartment for their affairs. He’s a good guy made miserable by his perceived powerlessness until he meets Shirley MacLain’s elevator operator who inspires him to stand up for himself. (Amazon Video, iTunes)

As one of the most ’80s films of the ’80s, Andrew McCarthy and Jonathan Silverman play two insurance company employees that uncover an insurance fraud plot and then they spend a weekend frolicking with their dead boss. It’s hard to explain. The ’80s were weird, kids. (HBOnow, iTunes)

This artsy film by Steven Soderbergh features Jeremy Irons as an Insurance clerk in 1919 Prague. He becomes entangled in an underground organization that causes paranoia and conspiracy fears to begin overtaking his life. So if you thought the ’80s were funny weird, the ’90s were just kinda dark weird.

In this noir/horror/arthouse film from the Coen Brothers, John Goodman plays Charlie Meadows, a seemingly affable Insurance Salesman with a secret that dramatically changes the course of the titular Hollywood scriptwriter’s life… A life of the mind, indeed. (iTunes, YouTube)

Mr. Incredible, Bob Parr, is an Insurance Agent for a large company at the beginning of this Disney/Pixar movie as his family tries to play it straight and hide their superpowers from the world. However, it’s quickly apparent that he is still a hero, by helping his customer even when it doesn’t necessarily profit the company. (Amazon Video, iTunes, YouTube)

In this FX television series inspired by the world created in the 1996 film of the same name, insurance agent Lester Nygaard (played by Martin Freeman) works at Bo Munk Insurance (BMI), a small agency in Bemidji, Minnesota that is also a notary and travel agency. (Is that a thing?) On the surface, Lester is the least likely person anyone would suspect of the horrible crimes he does. When he crosses Billy Bob Thorton’s psychopath, Lorne Malvo, the agency gets embroiled in a homicide. Fortunately, owner Bo Munk is spared!  (Hulu, iTunes)

Sarah Silverman plays an unhappy wife, mother, and addict, married to Josh Charles’ insurance salesman. A good, solid dad and husband, he’s the contrast to her many flaws and indiscretions. He’s the moral compass of the film against Silverman’s destructive brokenness. (Hoopla, iTunes, YouTube)

Liam Neeson plays Michael MacCauley, a former NYPD officer-now-insurance agent that meets a mysterious woman on his daily commuter train. He’s fired from his insurance job due to budget cuts and suddenly he’s embroiled in a conspiracy and murder plot. We like to think it’s his insurance chops more than his law enforcement background that helps him survive. (Hulu, AmazonPrime, Epix)